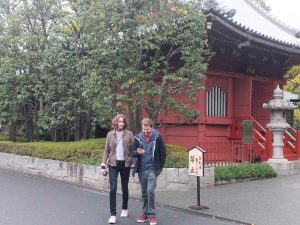 The progeny that I raised with my ex-wife Amy Barley are all grown up now.  Jackie is 27 and graduated first from NYU (where she spent time in Paris and Abu Dhabi while she was a student) with  honors in Linguistics and Cognitive Science and then with a Masters degree from USC in Business, Design, and Technology.  For years, she worked in TV and movies in NY (and is listed in the credits of Infinity War).  Now she is looking for her next adventure in UI/UX.  See her webpage.

Eli is 25 graduated remotely from Beloit College in Wisconsin where he majored in Cognitive Science.  He spent a semester in New Zealand in 2018.  Since graduating during the pandemic, Eli has published a number of academic papers, including a journal article in the International Journal of Machine Consciousness.  He plans to attend graduate school in the Fall at Indiana University.  Eli has also been creating world class digital art.

Watching the children grow into accomplished young adults is one of the essential joys of my life.

I was born on February 25th, 1966 in Miami, Florida. That makes me…old. I grew up in Kingsport, Tennessee. I also lived in Rochester, New York (for six months) and Longview, Texas (for two years), before heading off to college. (We followed dad around when he was transferred.) As a result of his transfer-survival techniques, my dad became a big banana at Eastman Chemical Company. Dad is retired now and lives on Dewees Island in South Carolina. He thinks he is a pirate. Dad taught me hedonism, which I practice to this day.

My mom died of leukemia in 2003. It’s from her that I inherited my drive and ambition.

I have two brothers. Chris, the youngest, finished his Biology degree at Emory and moved to Washington, DC.  He and his wife Esther have an adorable baby named Cora. Walt, one year younger than me, used to write TV for a living (CNN and Nick News for Kids). He now lives on Bainbridge Island with his wife Nora and two adorable kids.  A few years ago, Walt won an Emmy for his work. One year he was beat out by Bill Nye the Science Guy (really).

I am living with my girlfriend Romey Michael on the banks of the Shenandoah river near Berryville.

I was married to Amy Barley for 30 years before we split up in 2019.  We lived together for 34 years after meeting  at the University of Virginia in 1985. We lived in Charlottesville, Bloomington, Bean Blossom, Cognola (Italy), Waterford, Leesburg and finally Berryville.